SSC CHSL Tier-1 Exam Analysis 2020 (12th October, Shift 1): SSC CHSL 2020 Tier-1 exam is going to be held from 12th October to 26th October, 2020 for left over candidates. For the very first shift of first day, SSC CHSL 2020 (Tier 1) exam analysis has been provided. With the help of our experts and cooperation of our students, we have been able to provide you with the complete exam review. We would be covering the following points to give you the complete insight of SSC CHSL Exam held on 12th October 2020 (1st Shift):

Let us go through each parameter one by one and start with SSC CHSL Exam Analysis & Review.

For this shift, the level of the exam can be considered as Easy to Moderate.

The questions related to General Awareness asked in the exam will are given below: 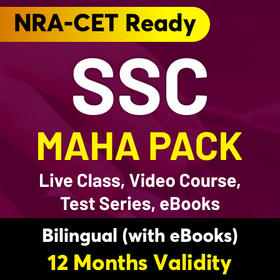 In SSC CHSL Tier-1 Exam 2020, English language section was Easy-Moderate. The cloze Test was based on Mobile Media. There was 2-3 Question from Active Passive & Direct-Indirect, 2 Questions from Fill in the Blanks, Sentence Rearrangement, 5 Questions from Cloze Test and so on.

Idioms- Up in the arm, Hornet Nest

Two DI were asked in the exam which are given below:
DI [Tabular]
DI [Bar Graph]

The General Intelligence/Reasoning section of SSC CHSL 2020 Tier-1 exam was easy-moderate. While the Analogy, Coding-Decoding, Blood Relation, and Series questions were easy. There were only 2 questions from mirror image.

As per the 1st day's exam analysis & review of SSC CHSL 2019-20 exam, the difficulty level of exam is considered as Easy to Moderate.

Q2. Which Section was most difficult?

As per the exam analysis of 12th October 2020, All sections are Easy to Moderate level except the Reasoning section. Reasoning was of Easy Level.

Q3. How was the difficulty level of General Awareness Section?

The General Awareness section was easy to Moderate level but 2-3 questions from current affairs were little bit tough.

The average number of good attempts can be considered from 78 to 80.