In order to score well in SSC CHSL 2021 exam, all candidates should be aware about the SSC CHSL syllabus and exam pattern. It is crucial to know the structure of the exam and the syllabus and subject wise topics that need to be prepared in and out.

Here, we start with understanding the exam pattern and Syllabus of SSC CHSL 2021 exam:

SSC CHSL exam has three different phases that candidates need to clear to get selected for various posts in the Government Offices. SSC CHSL Tier I is Objective Multiple Choice Question paper, Tier II exam is Descriptive Paper in English/Hindi, while Tier III is the Computer Proficiency Test.

The SSC CHSL Tier I exam is a computer-based online test (CBT) exam conducted online. Candidates are given a total of 60 minutes to solve SSC CHSL Tier-I paper comprising 100 questions that count to a total of 200 marks (2 marks each question). For each wrong attempt, candidates are penalised with 1/2 marks in Tier-1 exam.

SSC CHSL is conducted in three different levels, the syllabus of all the three levels is different. All candidates must be well-informed about the latest changes (if introduced any) in SSC CHSL syllabus and exam pattern to prepare for SSC CHSL 2021.

There are 4 secctions in Tier I of SSC CHSL exam which are given below: 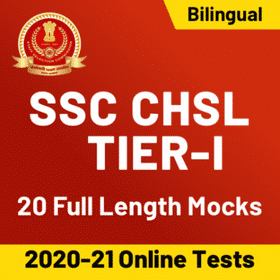 The detailed SSC CHSL Syllabus for Computer Based Examination (Tier-I) is discussed below:

Questions from General Awareness section are designed to test the candidate's general knowledge of the environment around him and its 14 application to society. Questions are also designed to test knowledge of current events and of such matters of everyday observation and experience in their scientific aspect as may be expected of an educated person. The test will also include questions relating to India and its neighboring countries especially pertaining to History, Culture, Geography, Economic Scene, General policy, Static Awareness, Indian GK and scientific research.

Geometry: Familiarity with elementary geometric figures and facts: Triangle and its various kinds of centres, Congruence and similarity of triangles, Circle and its chords, tangents, angles subtended by chords of a circle, common tangents to two or more circles.

The paper will have to be written either in Hindi or in English. Candidates must secure a minimum of 33% marks in order to clear Tier II round of SSC CHSL Exam.

As stated above, this paper calls for candidates to write an essay and Letter/Application that tests their writing skills of the candidates. The essay topics will be related to National Interest, Finance & Economy, Ecological Issues, Politics, Social Issues, Schemes & Governance, Sports, Technology, Geopolitics, Environmental Concerns etc. While, the type of letter/ application asked will be Application, Complaint, Suggestion, Official Appreciation, Follow up or Feedback etc.

Tier-III of SSC CHSL 2021 will be a Skill/ Typing Test of qualifying nature. The final merit of the selected candidates will be based on the basis of total score obtained in Tier-I and Tier-II.

Skill test for the post of Data Entry Operator:

In this test, a candidate should have data entry speed of 8,000 (eight thousand) Key Depressions per hour.

Duration of the Test is 15 minutes and English document having about 2000-2200 strokes/key-depressions is given to type.

Skill test for the post of Data Entry Operator in the Office of the Comptroller and Auditor General of India (C&AG):

The duration of the test will be for 15 minutes and printed matter in English containing about 3700-4000 key-depressions would be given to each candidate who would enter the same in the test computer.

The duration of the test will be for 15 minutes and printed matter in English containing about 9000 key-depressions/hour would be given to each candidate who would enter the same in the test computer.

Q. How many questions are there in SSC CHSL Tier I exam?

SSC CHSL Tier I asks a total of 100 objective-type questions to the candidates.

Q. Which is the high scoring section in CHSL Tier-I exam?

General Intelligence (Reasoning) is the easy and high scoring section as compare to other sections.

Q. What are the sections in SSC CHSL Tier-I Exam?

Q. Is there any negative marking for wrong answers in SSC CHSL exam?