The national tree of a country is one of the symbols of pride that is integral to the nation’s identity. Indian fig tree, also known as Banyan tree (Ficus bengalensis) is the National tree of India, whose branches root themselves like new trees over a large area. The tree is revered as sacred in Hindu philosophy. The roots then give rise to more trunks and branches. Because of this characteristic and its longevity, this tree is considered immortal and is an integral part of the myths and legends of India. The tree is often symbol of the fabled 'Kalpa Vriksha' or the 'Tree of Wish Fullfillment' as it is associated with longevity and has important medicinal properties. For centuries the banyan tree has been a central point for the village communities of India. Even today, the banyan tree is the focal point of village life and the village council meets under the shade of this tree. Being native to that country adds to the privileged status of the tree to be considered as a national symbol. 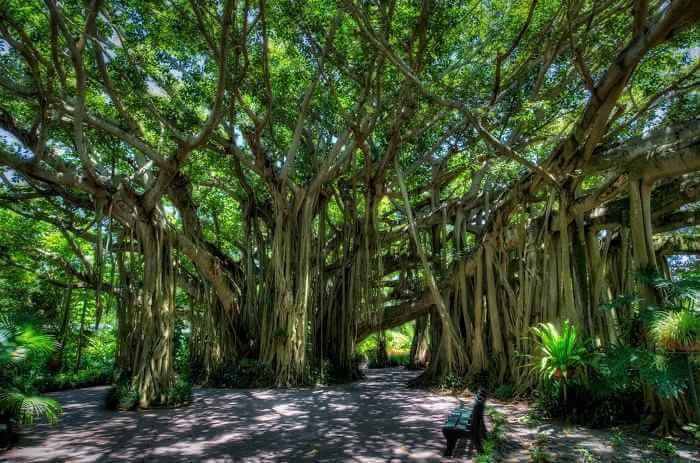 Q 1. Which is the national tree of India?

Ans. The Banyan Tree (Ficus benghalensis) is the National Tree of India.

Q 2. What is the scientific name of national tree of India?

Ans. Ficus Bengalensis is the scientific name of national tree of India.

Q 3. Where is National tree of India is found?

Ans. Banyan Tree is found all over the country.

Q 4. What is the family of Banyan Tree?

Ans. Moraceae is the family of Banyan Tree.

Q 5. What is the class of Banyan Tree?

Ans. Magnoliopsida is the class of Banyan Tree.