IBPS PO Salary: Bank PO candidates are always curious to know the salary of Bank PO, its allowances, career growth, perks and promotion policy. Read further to know about Salary, Job Profile, Career Growth and Promotion Policy of an IBPS PO. Here, we will also learn what might be the salary of an IBPS PO after 2 years and 7 years. IBPS PO is one of the most talked about competitive exams amongst the graduates. Along with IBPS PO Preparation, candidates are curious to know the salary and the increment in salary after 7th pay commission. So, first of all, you need to understand that the salary of bank employees is not revised by 7th pay commission.

Bank employees salaries revision takes place on the basis of bipartite settlement. So, for IBPS PO 2020, salary will be decided on the basis of 10th Bipartite Agreement. The revised IBPS PO Salary was effective from 1st January 2016.

There are different components in the salary structure, lets discuss each component one by one:

IBPS PO Salary in India after the Bipartite Settlement

IBPS PO House Rent Allowance (HRA): It varies according to place of posting and can be 9.0% or 8.0% or 7.0% of the basic salary depending upon type of cities (i.e., metros, big cities or other locations).

IBPS PO Dearness Allowance (DA): Dearness Allowance (DA) is given to the employees as a percentage of the basic salary (In January 2016, it was around 39.8% of the basic salary). This is revised every three months based on the All India Consumer Price Index Data published by the Ministry of Statistics and Program Implementation, Government of India. The Bank unions are determined to make it a monthly revision in the impending wage settlement.

IBPS PO Special Allowance (SA): This allowance has been included in the last wage revision for the banks. It is about 7.75% of the basic pay. It came into effect from 01.01.2016.

Some other perks of an IBPS Probationary Officer are Traveling Allowance, Newspaper Reimbursement, Medical Aid, Benefits under New Pension Scheme etc. If we sum up then the salary may be 35,000+ rupees.

Here, we are providing you with the details of IBPS PO Salary Slip . You can go through this Pay slip for your reference to get an idea about the salary which is credited in the account of an IBPS Probationary Officer (PO). 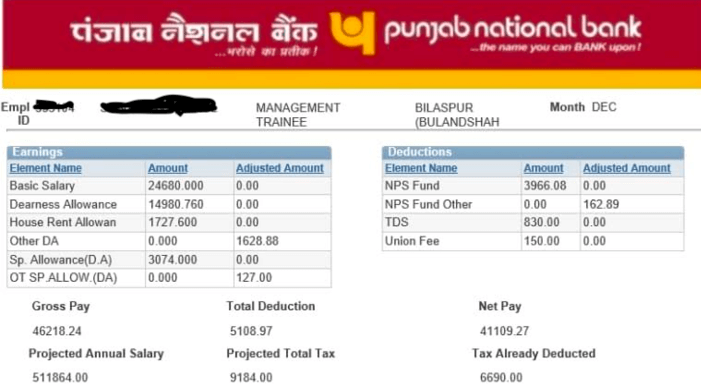 Career Growth of an IBPS PO The salary of Officer JMGS I (Junior Management Grade Scale I) or probationary officers in banks ranges from Rs. 23700 to Rs. 42020.

For other Scale officers:

Q1. What is the basic pay of IBPS PO?

Q2. Which Bank PO has the highest salary?

SBI offers the highest salary pay package to its probationary officers, the other public sector banks also offer quite a handsome sum to the PO. The average public sector bank monthly and annual salary is higher than that of a PO working in a leading private bank.

Q3. What is the HRA provided to a IBPS PO?

It varies according to place of posting and can be 7% to 9% of the basic salary.

Q4. Is the IBPS PO salary more than the salary for an Officer in RBI?

No, The IBPS PO salary is slightly less than the salary paid to a Grade B Officer in RBI. The overall perks and allowances are also almost the same for IBPS and RBI.